Welcome to the website of the International Association for Plant Biotechnology (IAPB). Here you’ll find information about the association and its activities. Founded in 1963, the IAPB hosts a quadrennial congresses – the next takes place in Dublin, Ireland in August 2018.

The association has as its objectives, to promote plant biotechnology, including cell and tissue culture applications.

Founded in 1963, the IAPB publishes a peer-reviewed journal in the area and organises a quadrennial congress at which the themes, identified as important by the membership, are discussed.

The IAPB is the largest international professional organisation representing the interests of the world-wide plant biotechnology community (Vasil, 2008).

The following is a list of all IAPB congresses:

Plant Tissue Culture And Beyond – A History Of The IAPB

The science and art of plant tissue culture, and indeed of plant biotechnology, had its roots in the vision of the Austrian botanist Gottlieb Haberlandt (1854-1945) who wrote in 1902 that “To my knowledge, no systematically organized attempts to culture isolated vegetative cells from higher plants in simple nutrient solutions have been made. Yet the results of such culture experiments should give some insight to the properties and potentialities which the cell as an elementary organism possesses… I believe, in conclusion, that I am not making too bold a prediction if I point to the possibility that, in this way, one should successfully cultivate artificial embryos from vegetative cells”. His vision was accompanied by many experiments, which were however unsuccessful, to cultivate differentiated epidermis cells of Ornithogalum and other species in an artificial medium in culture.

The first successful prolonged in vitro cultivation of plant tissues and organs – and their proliferation and differentiation – included, among others, tomato roots (P.R. White, 1934), tobacco and carrot calluses and cambial tissues (R.J. Gautheret and P. Nobecourt, 1939), shoot tips and meristems (E. Ball, 1946). Soon, an entire new arsenal of procedures and techniques became available to the scientific community for controlling plant regeneration and morphogenesis in culture. Some notable major discoveries included chemical and hormonal control of regeneration (F. Skoog and C.O. Miller, 1957), basic and applied aspects of organogenesis and somatic embryogenesis (Reinert, 1959), practical micropropagation and production of virus-free plants (G. Morel, 1960), haploid plants (S. Guha and S.C. Maheshwari, 1964, J. P. Nitsch, 1967), culture and regeneration of protoplasts (E.C. Cocking, 1960), production of secondary metabolites (B. Kaul and E.J. Staba, 1967) and large-scale cell culture in bioreactors (M. Noguchi et al., 1977), to mention just a few landmarks. This led, following many pioneering studies in dozens of laboratories around the world, to the first true breakthrough of nowadays plant biotechnology: commercial micropropagation (reviewed by T. Murashige, 1974). The ongoing achievements in in vitro culture of pollen, protoplasts and cell suspensions – and their ability to regenerate whole plants – resulted in new disciplines of plant science: somatic cell genetics and metabolite production, somatic hybrids, production of haploid plants, selection of variants and mutants, and improved generation of metabolites. All became available for the community of plant scientists and breeders, expanding the diversity, agronomic and commercial value of plants.

The International Association Of Plant Tissue Culture (IAPTC) And Its Offsprings

The New Era Of Plant Biotechnology

The great pioneering discoveries in molecular biology, i.e., the structure and function of nucleic acids and proteins, had its impact on plant biology and biotechnology. Based upon earlier studies of DNA transfer from Agrobacterium tumefaciens into plants during crown gall formation, Marry-Dell Chilton and Jeff Schell (in collaboration with Marc van Montagu), independently and simultaneously, announced in 1982 the production of the first ever engineered plant (tobacco). A new era in plant biotechnology began, resulting in major scientific, agronomic and commercial achievements in dozens of plant species, especially agricultural crops. Since then, hundreds of excellent scientists around the world are currently engaged in significant achievements in plant science, unraveling the secrets of plant tissue culture and biotechnology, indeed of plant growth, development and morphogenesis.

The full realization and impact of the new developments depend not only on continued successful and innovative research and development activities, but also on a favorable regulatory climate, on public acceptance and on joint efforts. Plant scientists now have a central role in society. The International Association of Plant Biotechnology (IAPB), caring for and supporting plant tissue culture and biotechnology around the world, is here to serve you.

The IAPB has members in many countries worldwide including: 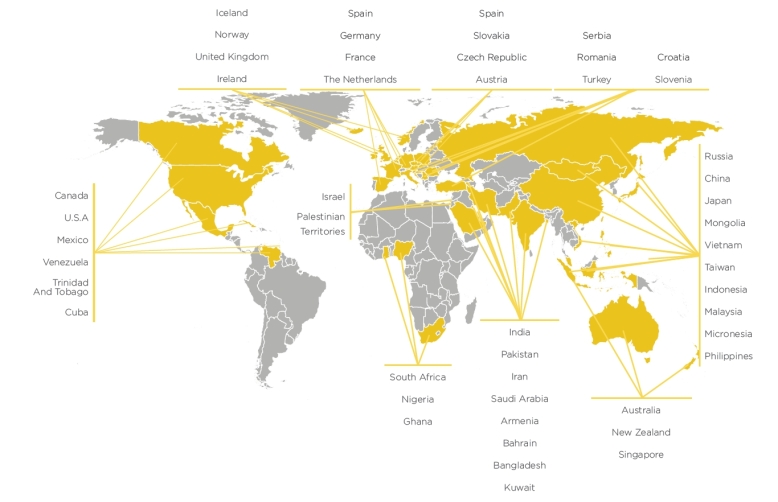